Spiders thrive in North Carolina due to the state’s warm average temperatures, so you may encounter arachnids no matter the season. Despite there being over 1,500 species of spiders residing within the state of North Carolina, you may be surprised to learn that only two of these are poisonous spiders that pose a threat to humans.

Although there are multiple spiders that can bite, the only two associated with serious injury or illness are the black widow spider and brown recluse spider. Both poisonous species range widely across the state and, in extreme cases, a bite from either of these two spider types can result in death. The southern black window is indigenous to the southeast region of the United States. The black widow is easily identifiable by the following characteristics:

Black widows prefer to hide in areas out of view. They can typically be found in dark crevices and may hide in sheds, garages, under the stairs and among high shelves. Outdoors, they can be found beneath rocks and in patches of tall grass.

Black widow bites often cause severe neurological issues, but while black widow bites are serious, they are not typically fatal. It is still important to seek medical treatment immediately if you suspect a black widow spider has bitten you, though. Although you may not notice pain immediately after the bite, symptoms could arise later. Here are symptoms that will possibly occur as the spider’s venom affects the nervous system:

In some incidences, black widow bites can prove fatal to young children. Physicians may prescribe muscle relaxers or painkillers to those who have been bitten by a black widow spider. In serious cases, an antivenin is injected to neutralize the effects of the spider’s venom. A doctor will monitor you for up to two weeks after the bite to see how you’re feeling and check for any side effects associated with the antivenin. 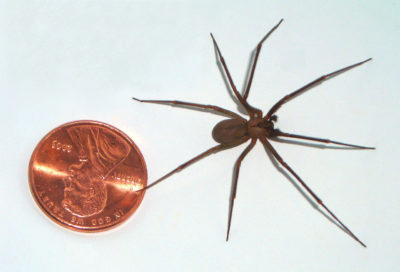 Brown recluse spider bites have been linked to the following symptoms:

How to Reduce Your Chances of Getting Bitten by a Spider

North Carolina spiders, especially the house spiders you’re most likely to come across, are rarely dangerous. Yet avoiding a bite is far better than risking an allergic reaction or the possibility of encountering a deadly black widow, brown recluse or some accidentally imported high-risk spider.

To prevent exposure to poisonous North Carolina spiders, always be on the lookout while outside. Avoid walking barefoot outdoors in tall grassy areas or in sheds and garages. Wear gloves while gardening. Shake out any stored clothing or bedding items before use to check for presence of spiders. Wearing insect repellent containing DEET has also been shown to prevent bites from black widows. Clear out any clutter indoors and outdoors to prevent spiders from residing there. Seal any openings around doors and windows to prevent spiders from entering the home.

It’s impossible to keep spiders out all the time, however. To avoid bites from house spiders while indoors, you should:

Response to a Poisonous Spider Bite

Although not typically a major concern, the bite from some North Carolina spiders can be dangerous, even deadly. If you suspect that you have been bitten by a black widow, a brown recluse, or some accidentally imported highly poisonous spider species, immediately:

If symptoms are not serious but you still desire positive spider identification, the Charlotte regional Cooperative Extension office will do identification for free.

How Dangerous Are Other North Carolina House Spiders?

Just because a certain spider species is not common to regional Charlotte, NC, that does not mean a species can’t be present and dangerous to local residents. Spiders are not bound by the territorial restrictions established by any given spider distribution database. Transportation outside a known range of habitat is as easy as hitching a ride in a car, on luggage or even in the clothing of traveling humans.

The concept of danger from a spider bite must extend beyond the possibility of a bite by a black widow or a brown recluse. Fact is: when biting a victim or prey, most spiders inject venom. Technically this makes nearly all spiders “poisonous.” However, a typical spider bite only has the significance of a wasp sting. That said, while not of major concern to the average person, any spider bite can trigger allergic reactions in susceptible victims. This is often a risk more prominent in hypersensitive individuals, younger children and seniors well up in years.

On the plus side: In general, regional Charlotte and other NC residents typically experience serious threat only from the black widow and the brown recluse. Furthermore: Most spider bites are accidental in nature – a response to human disturbance of a spider in its nest or web; spiders would rather keep to themselves.

Some spider species craft elaborate webs. Others dwell beneath rocks, wood and other outdoor shelters. They might build tubular tunnels from which they ambush prey. However, according to the NC State University Department of Entomology, spider species that operate from a loose collection of webbing are those most likely to invade your Charlotte regional home. This spider type hides by day and hunts by night.

In the long run, spiders have an undeserved reputation as being excessively dangerous to humans or pets. In reality, these creatures are mostly beneficial to exterior human endeavors. The operative word here is “exterior.” Even though spiders in your North Carolina house may not present an excessive health risk, they are not something most homeowners desire to see.

How to Handle Spider Bites from Non-Poisonous Spiders

If you suspect that you have been bitten by a spider that’s not normally dangerous to humans, take the following first aid steps:

If you decide to seek out medical treatment, if possible, bring the spider with you to positively confirm its identity.

What to Do If You See a Poisonous Spider

If you spot a potentially poisonous type of spider, don’t try to kill it on your own. Contact pest control professionals with experience in removing spiders from a property. Carolina Pest Management can help you with spider identification, treatment and maintenance. We have proudly served the Carolinas for more than 75 years and can use green methods to remove all household pests. Contact Carolina Pest today for more information on the many ways we can help.